On the borders of Asturias, Cantabria and Castilla y León, Picos De Europa is arguably the most beautiful national park in Spain, certainly the most dramatic! With 300 square miles of largely untouched, unspoilt landscapes which contrast with their surroundings quite spectacularly, the Picos De Europa national park features deep vertical gorges, rocky mountains that peak at over 8,000 feet above sea level, sprawling forests, glistening lakes and endless opportunities for adventure.

Along with extraordinary scenery, the Picos De Europa is home to various endangered species. The European brown bear, golden eagle and rare Asturcón wild horse all call the region home, along with more common residents like peregrine falcons, short-toed eagles and hundreds of other species. As there is a comprehensive ban on hunting and strict rules on human interaction with wildlife, animals in the national park have little to no fear of humans and can often be viewed close enough to make ideal photo opportunities.

The mountains of Picos De Europa form a natural boundary between the hot/dry southern region of Spain and its cooler, moister north. Of course, altitude and positioning plays a key role in determining temperatures and weather conditions in the park. It can be stiflingly hot on the ground, though knee-deep in snow a little further up. As the weather can change very quickly, those exploring the park are advised to plan for various conditions before setting off – sunscreen and emergency waterproofs being a good place to start. On the plus side, while things do have a tendency to be unpredictable, the Picos De Europa national park enjoys a climate that is noticeably milder than that of the south of England, throughout the year. 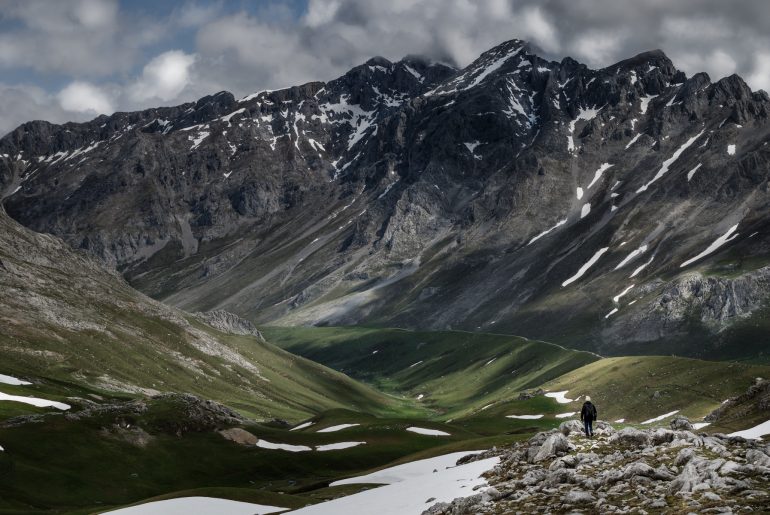 The park is a haven for those with a taste for outdoor pursuits, though you don’t have to be too hardcore or adventurous to get a real kick from what’s on offer. Some of the mainstays that pull in tourists from all over the world include climbing, hiking, caving, rafting, fishing, horse riding and mountain biking. Most visitors to the park prefer to set out on enjoyable walks than demanding hikes, though there are trails to suit every taste and ability level across the board. There are information centres and tourist information offices all over the park, from which maps and weather forecasts can (and should) be obtained. 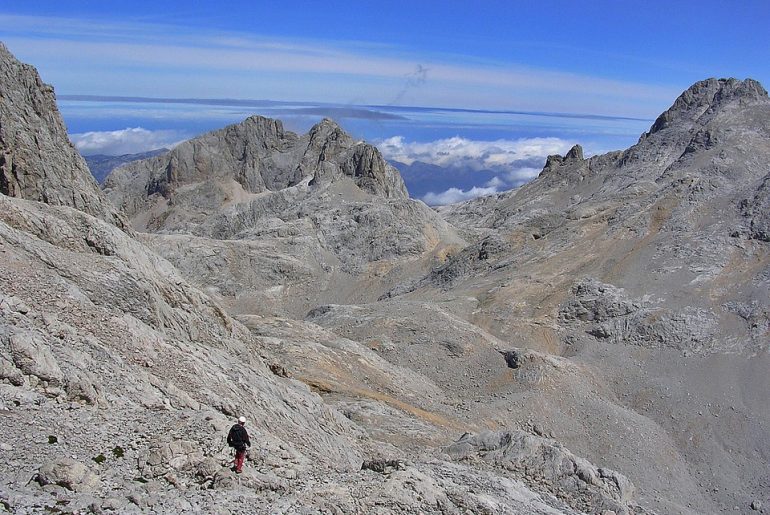 If heading out on any planned walk or route, be sure to check it out beforehand and ask questions where necessary. While many of the best walks are far from demanding, there will often be steep slopes to traverse and paths that can’t be relied on as pristine. Even when things start out gentle and forgiving, they can soon transform into something altogether more challenging. 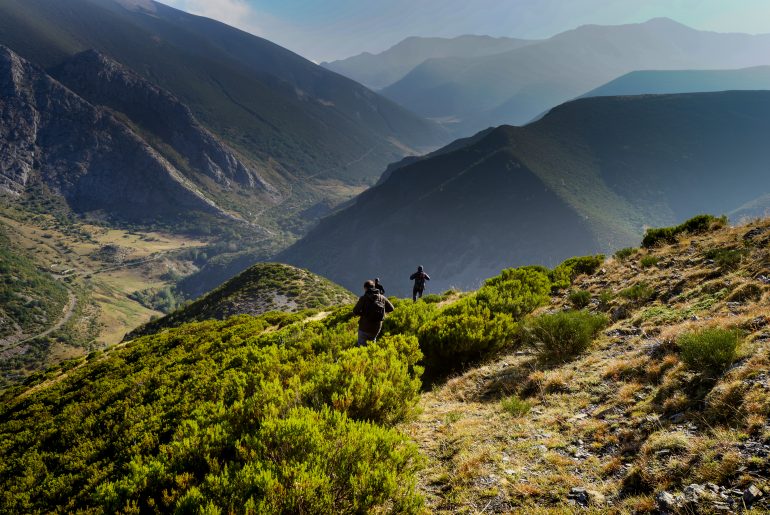 Getting There and Around

The easiest and most enjoyable way of accessing the park is to take the regular ferry crossing from England, complete with you own car in-tow and Brittany Ferries sail to Spain and the ferry ports of Santander or Bilbao. Having your own transport is largely essential, if you’re looking to get the best from the region and all that’s on offer. The N-621 highway from Santander (where you’ll disembark the ferry) takes you not only to the Picos De Europa, but straight through the heart of the park. Take a map and as soon as you get your bearings, you’ll never tire of exploring all the hidden roads and byways that snake through the region, often leading to incredible views and vistas without even having to get out of the car.

In addition, don’t pass up the opportunity to travel by cable car to some of the higher peaks – Fuente Dé in particular. The convenient and enjoyable cable car rides enable those who aren’t quite as taken with challenging mountains climbs the same opportunity to enjoy the breathtaking views from the top. 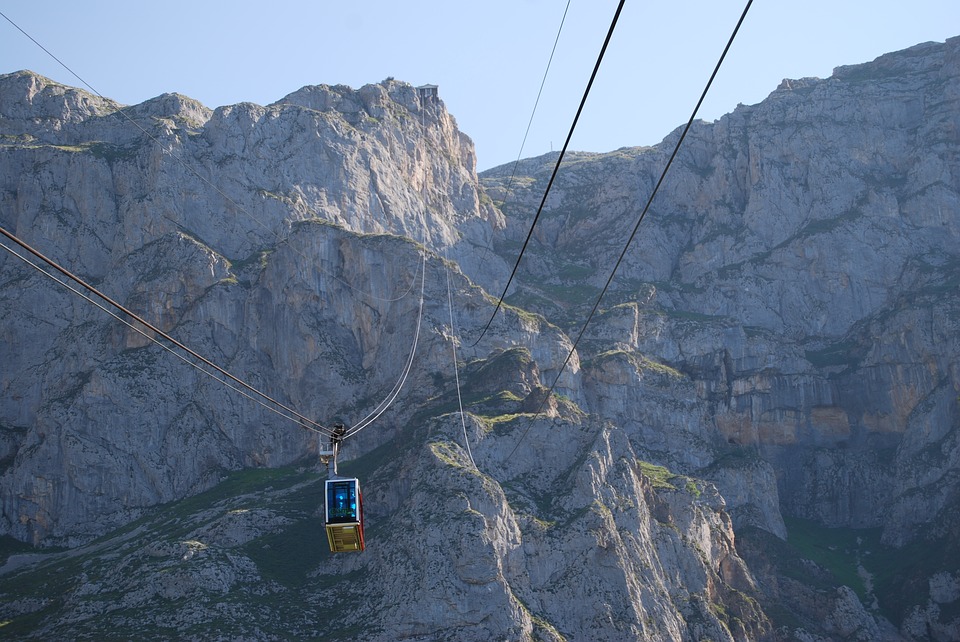 As for accommodation, you’ll be able choose from the widest spectrum of option of perhaps any Spanish holiday destination. Village life in the small, secluded residential areas of the Picos De Europa park itself hasn’t changed for generations and is entirely unique. If you’d like to live how the locals do, you could find yourself a guest house or camping spot accordingly. However, you’ll also never be more than a short drive from more luxurious and modern accommodation, both in the park itself and its surroundings. 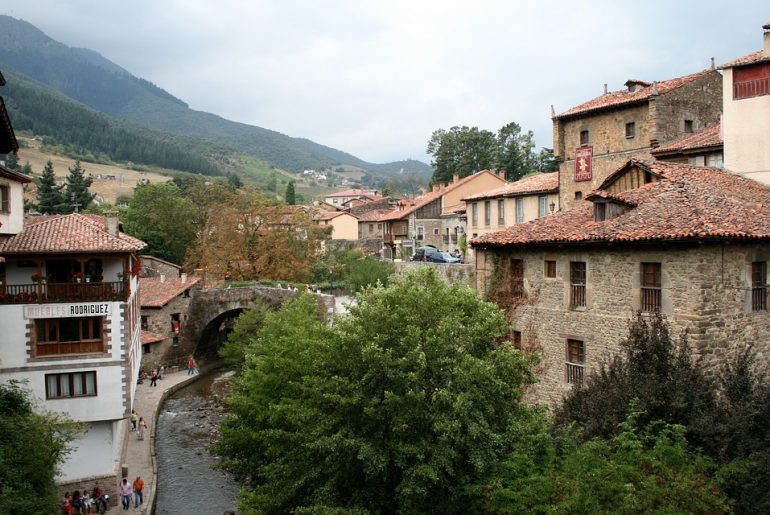 You’ll want to check out as much of what’s on offer as time allows, but there are certain highlights of the Picos De Europa that should be considered unmissable. Just a few examples of which include the following:

Head north-west from the park to explore the former capital of the Asturias region, not to mention one of the country’s most important religious locations. Today, cosmopolitan lifestyles meld surprisingly well with the historic origins of the city – the Sunday market in particular being a great spectacle to check out. 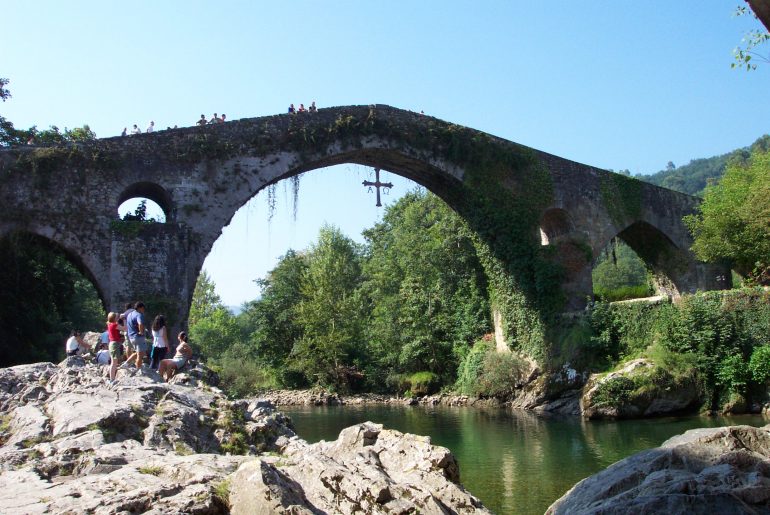 Two of the most stunning lakes in the Picos De Europa national park, perched almost a kilometre above sea level and accessible only by way of a challenging 13km hike (or drive). The payoff is more than worth the effort, with a variety of bars, cafes and amenities to unwind in.

Take the opportunity to ride the funicular railway to access one of the region’s best-preserved mountain villages. If time permits, book yourself a room ahead of time and see just how the village transforms during the pitch-black night. 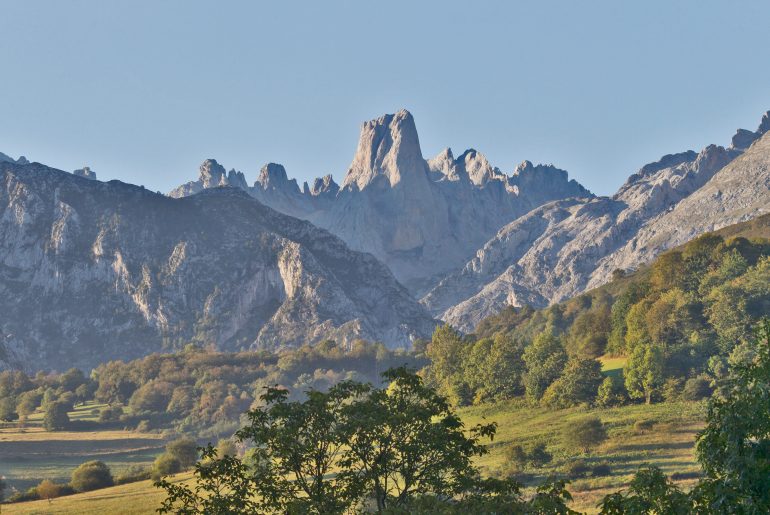 As previously mentioned, a cable car ride not to be missed that concludes 1,800m above sea level at the start of some of the best walking trails in the park. There’s also a great restaurant at the top with unbroken views of the surroundings. 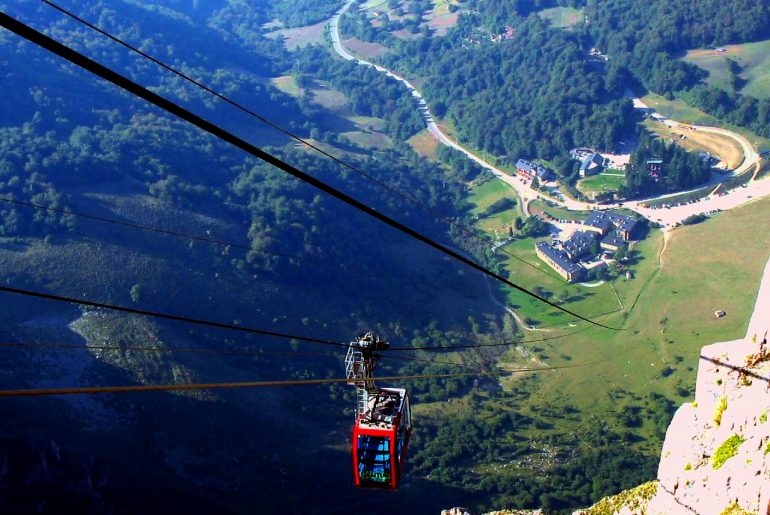 A Beginner’s Guide to Walking the Picos

The Spanish Picos de Europa National Park in northern Spain is as precipitous as it is magnificent. Unlike many other parts of Spain, the Picos de Europa is largely unspoiled by the demands of tourism. At their highest, the Picos reach more than 8,000-metres into the clouds. There are more than 300 square miles to explore on foot, so if you want a walking holiday that is both scenic and challenging in equal measure, pull on your walking shoes and head to the Picos de Europa. For dramatic scenery at every twist and turn of the path, it is hard to beat the Picos. The jagged peaks provide plenty of photo opportunities. Look up and see if you can spot golden eagles or peregrine falcons soaring high in the sky. Elsewhere, you might see a shaggy mountain pony or a Chamois, a local breed of mountain goat/antelope.

Nature is prolific in these mountains. Hunting has been banned and the local wildlife is no longer as afraid of humans, which makes wildlife photography a breeze. 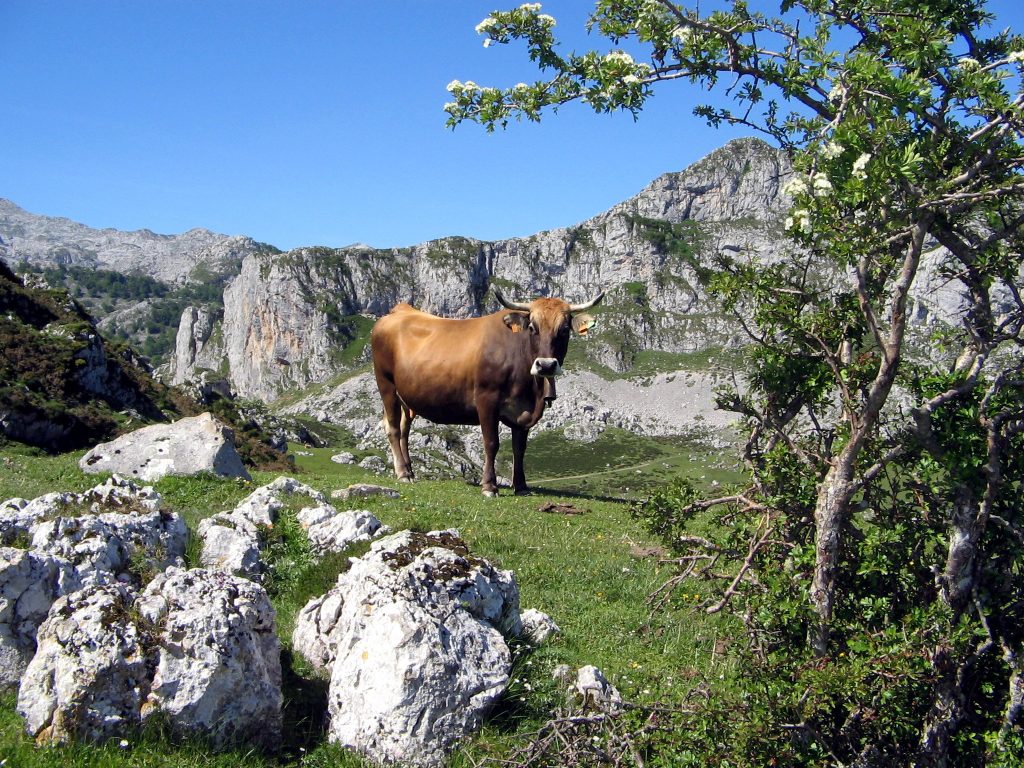 Walking in the Picos

There is something for everyone in the Picos de Europa, from a short but pleasant walk around the lakes in the western massif to the more challenging ascent up the Hou Santu and Cares Gorge Walk. Many of the marked routes are old mining and shepherd tracks. There is also an old Roman route known as the Archdeacon’s Path, which takes you from Soto de Sajambre to Amieva. 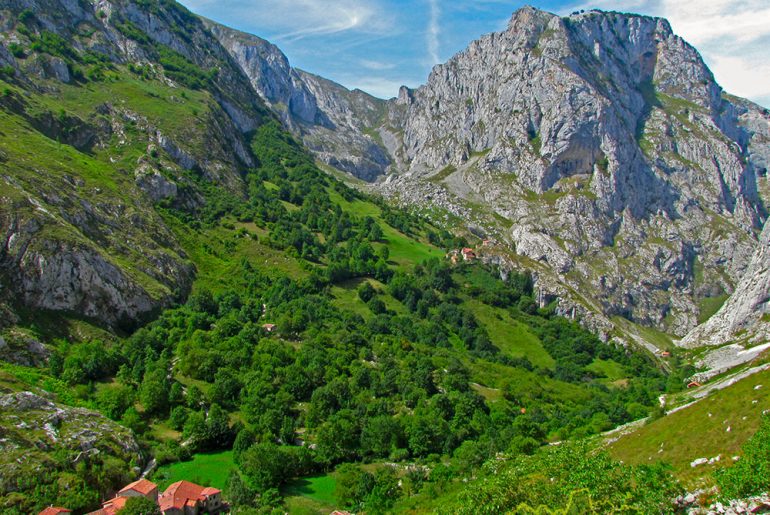 The Cares Gorge is one of the most popular walking trails in the Picos, but it is rarely crowded. The twisting, and at times precarious, path is hewn out of solid rock. It was originally constructed for workmen and runs for 11 kilometres through the Picos Mountains. This is not a route for the faint of heart. The footpath is barely two metres wide in places and there are no safety barriers. You need a good head for heights, but if you have the stomach, the views are well worth it.

If your legs are tired but you still want to enjoy the spectacular mountain scenery, take a cable-car from Fuente Dé. You may have to wait a while as there are only two cars making the vertiginous 800-metre climb, but the queuing system is relatively painless and the scenery is so amazing you won’t mind the wait. Early birds will have time to make the 8 km descent back down through oak forests and lush vegetation.

There are many published guides to established walking trails in the Picos de Europa National Park. The park is well maintained and the walking trails are signposted. You are free to walk alone, but if you prefer, there are plenty of local guides willing to show you the best trails and most scenic lookout spots. If you do get lost, ask a local for directions – they are always happy to assist.

There are several ways to reach the Picos, despite its remote location. You can catch a flight from London’s Gatwick Airport direct to Santander or Asturias Airport. From there, hire a car or catch a bus from Santander to Potes.

Alternatively, Brittany Ferries run regular ferry crossings to Santander with three sailings a week from Plymouth and every Sunday from Portsmouth. It is a relatively short drive from Santander to the Picos – approximately 1.5/2 hours. Click here to see a map.

Surprisingly, the Picos de Europa National Park is one of the few parts of Spain that are perfect for a summer walking holiday. Whereas the Costas are baking in August, the weather in the Picos will be comfortably warm and mostly clear. Rain is a strong possibility, as this part of Spain is well-known for its changeable weather, so pack your waterproofs, just in case. 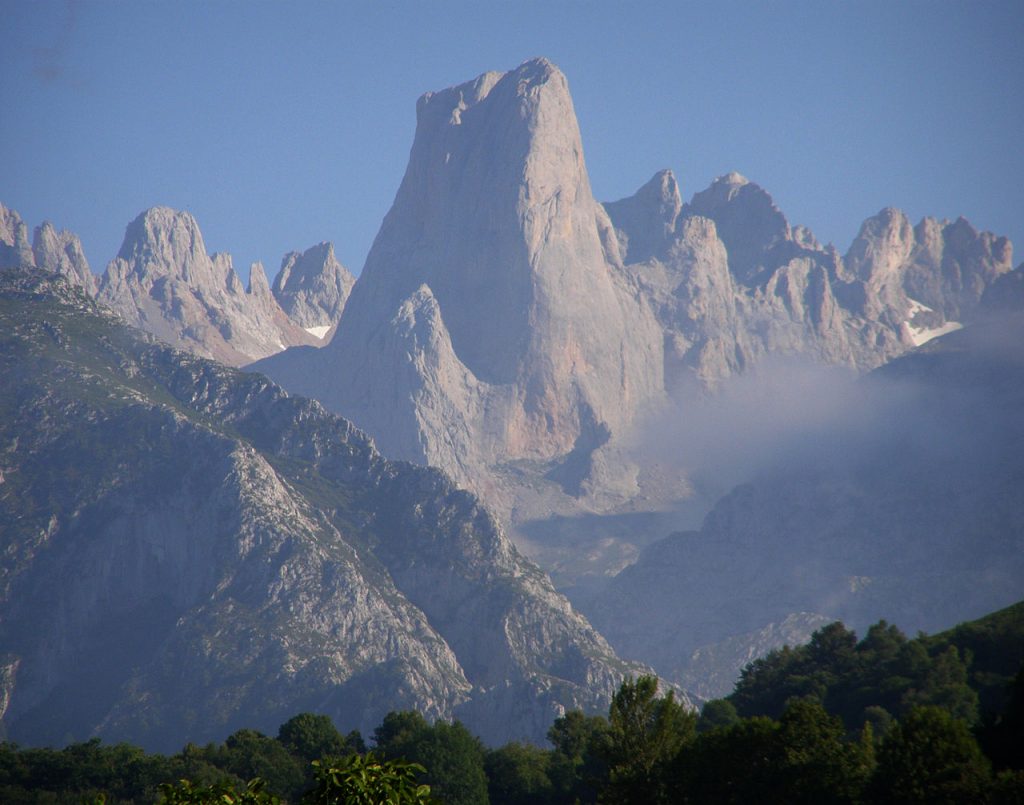 There is a range of accommodation on offer within the Picos de Europa National Park. Airbnb, Kayak, and other popular hotel booking websites offer a range of options at all price points, including self-catering, B&Bs, and small hotels.

Food tends to be plain dishes based on meat and potatoes. You may come across offal on the menu if you venture out, so pack a dictionary if you don’t fancy pigs’ trotters or boiled snout for dinner. The best restaurants in the region are located in Santander, including La Vinoteca, which is rated as the #1 eatery on Trip Advisor. 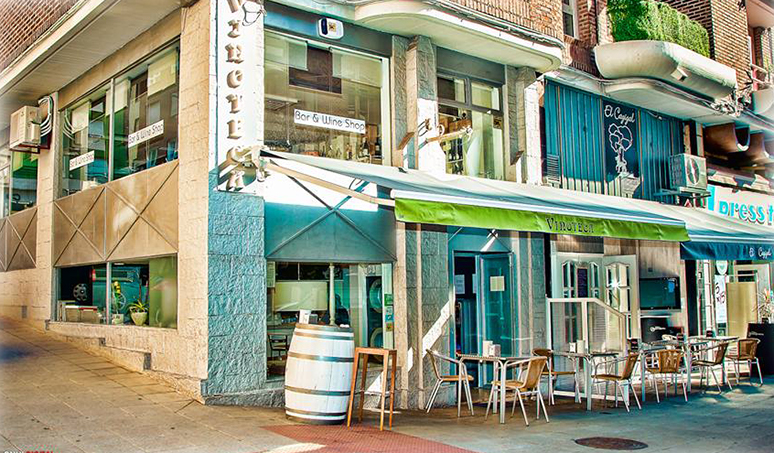 Picos de Europa is a magical place to take a walking holiday. In fact, it is hard to imagine anywhere better!

A Few Facts About the Picos De Europa

The mountain range itself is the third highest in Spain

Some of the mountains have vertical drops of more than 2,300m

The world’s sixth deepest cave can be found in the park – the Torca del Cerro at 1,598m deep

Some shaded areas remain covered in snow 365 days a year

Unique Ideas for Nights Out in London