Da Nang, largest port city on the South Central Coast of Vietnam, is worth visiting due to its tropical climate, breathtaking scenery, exquisite cuisine and historic monuments. Vietnam’s fifth largest city, overlooking the turquoise waters of the South China Sea, is one of the major commercial, educational and cultural centres of the Socialist Republic and has become a popular tourist destination, with several hotels springing up to cater to this influx of people.

Due to the city’s position on the seafront it should come as no surprise that its pristine beaches attract quite a crowd. In response, a number of hotels have appeared up and down the beaches, including many in the luxury four and five star range.

This luxury resort, located by the exquisite My Khe beach amidst tropical gardens, has eighty seven rooms with breakfast, Wi-Fi, parking and use of the spa included in the price. Whether you explore the gardens, take a dip in the pool or recline on the golden sands of the beach, the Fusion Maia Resort offers an unforgettable experience at which you will look back and smile. In the evening you may sample the restaurant’s culinary delights or get a drink at the bar.

This hotel is located a mere fifty metres from the Pham Van Dong public beach, a popular spot with locals and tourists alike. The beach, which stretches nearly thirty seven miles and is free to visit, features white sand and palm trees. After a day’s sunbathing or swimming at the beach you may retire to your apartment, complete with en suite bathroom, cable television and free Wi-Fi, or dine at the restaurant or hit the bar.

This modern and stylish hotel, standing close to the Han River in the Da Nang Central Business District, is an fantastic place to say whether you are there for business of leisure. This thirty-seven story building, containing three hundred and twenty three rooms with free Wi-Fi, offers a magnificent view of the commercial hub of the city including the four bridges that straddle the Han River.

The Orange Hotel resides on Hoang Dieu street, in the vicinity of Da Nang’s cultural centre, and was built in the European style that had its heyday during French rule in Indochina. There are eleven floors with forty five rooms divided into five categories: standard, superior, deluxe, suite and family. The Restaurant Area serves European and Asian cuisine and provides a spectacular view of the city. 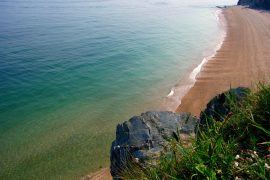