As Australia’s most urbane, largest and oldest city, beautiful Sydney indeed has something unique to offer every tourist. Picturesque sandy beaches and lovely cruises make the Harbour City the ideal holiday destination for tourists in search of fun in the sea and on the sand. First-class shopping, dining and cultural and historical institutions such as the amazing Sydney Opera House beckon visitors in search of an inspirational travel experience. It has many amazing attractions both man-made and natural assets.

The man-made wonders include the Sydney Harbour Bridge and the Sydney Opera House which are also the most visited tourist attractions. The natural attractions include beautiful public gardens, harbour islands, zoos and parks. Sydney is the perfect city for adventure and is full of special things to explore and discover making it a perfect holiday destination.

Although there are many things to know about such an amazing city, here is a list of unique facts about Sydney:

The Sydney Opera House is among the world’s well-known buildings. It was designed by Jorn Utzon a Danish architect and was finished in 1973 after sixteen years of construction at a cost of greater than 100 million dollars. The Sydney Opera House hosts a minimum of three thousand shows every year. It is an interesting fact considering the fact that its original objective was to become a tram shed!

As for Sydney Accommodation, the city has various amazing hotels, which offer comfortable options and are also pocket friendly. From the lavish 5 star hotels to the simple classy hotels, the hotels in Sydney meet everyone’s needs.

3. Sydney is the 42nd most visited city in the world

4. Sydney is one of the largest cities in its land size

Sydney is among the biggest cities in its land size covering 1580 square kilometers, more than double of New York and the same as London.

Elizabeth farm at Parramatta in Sydney is the oldest surviving building in the country. It is located 23 kilometers from town Centre. It was built in 1973 as the family homestead for John Macarthur who was a wool pioneer.

6. A sixth of the population lives in Sydney

A sixth of the Australian population dwells in Sydney, although about a third of these were not born in the country but immigrated from over 200 countries all over the world.

Among many amazing bridges around the world, the amazing Gladesville Bridge is located over the Parramatta River to the west of Sydney Harbor. It is approximately 305 meters, which makes it the world’s longest concrete arch.

8. English, Arabic and Chinese are the popular languages

Even though English is indeed the most spoken language in Sydney, two other languages, Arabic and Chinese are also popular among people living there.

The amazing Sydney Tower is 324.8 meters making it the second highest observation tower in the Southern region. On top of the tower, there is a revolving restaurant making it even more fascinating. If you plan on going on a holiday vacation to Australia or especially to Sydney, you should make sure you book accommodation online before departing in order to have an amazing holiday. 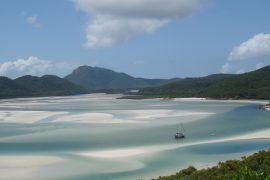 Why You Need to Visit the Whitsundays This Summer