It doesn’t have to be a long wait to put on your skies to maintain or improve your skills if you make use of an indoor centre. Many of the slopes consist of genuine snow and their perfect conditions allow for learning twice as quickly as outdoors. So to help you prepare physically and impress the next time you hit the Alps, here is a selection of some of the best indoor slopes in Europe:

The Snow Centre in Hemel Hempstead is the home of the largest lesson slope in the UK and its snow sports school is recognised as a centre of excellence by the British Association of Snowsports Instructors (BASI). It offers a wide range of courses from beginner skiers or snowboarders to the elite, who can make use of the 160m main slope.

It is also a great option for freestyle and slopestyle skiers, thanks to a team that builds freestyle parks containing boxes, rails and kickers to keep the more accomplished skiers entertained. Additionally, their freestyle fundamentals clinic teaches the basics of flatland tricks so you can quickly move on to experimenting on the features.

Other activities to take part in include the ‘Arctic Alley’; a sledging run with tunnels, bumps and turns that the children will love to try out on a family ski day.

Chill Factor is located in Manchester and is the longest indoor ski slope in the UK at 180m. It offers lessons for experts as well as those that are setting foot on the snow for the first time.

The centre also hosts ‘Extreme Mondays’, where the thrill-seekers can get their adrenaline fix with activities such as snowscooting and airboarding. Snowscooting is a popular craze abroad and is based on a mixture of snowboarding and BMX, descending down the slope on a bike with boards instead of wheels.

For those that want to experience a European ski holiday in the off-season, there are some great indoor ski centres on the continent that can offer bigger runs than the UK. SnowHall Amneville-Les-Thermes in France is the second longest indoor slope in Europe at 620m. The centre is also great for children with a 100m slope designed for teaching the kids in a safe environment, as well as a toboggan run reserved for the under 12s.

At 640m, Germany’s Alpine Centre Bottrop holds the record for the longest indoor ski slope in the world. For the more experienced there is a steeper slope of 24% inclination, and for freestyle skiers there is a funpark specially built with jumps and tables, with a ‘Shredmill’ park for the real experts.

There are also some non-snow based activities to break up the skiing such as the summer toboggan run, the high-rope garden and indoor skydiving. 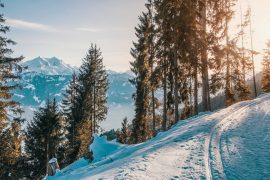 Guide to skiing in the Alps

10 Best Countries To Ski In The World 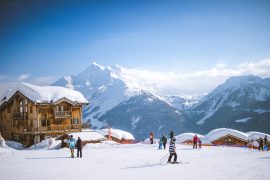